Layer-2 protocols expand the range of options available to Bitcoin users. They enable Bitcoin to scale and bring benefits that include lower transaction costs, improved speed, and increased anonymity.

This article compares two different, but complementary, layer-2 payment solutions for Bitcoin: the Lightning Network and the Liquid Network.

Each of these networks has different applications. Lightning is optimised for use in retail, allowing merchants to receive micro to small-sized payments from customers cheaply and quickly. Liquid is primarily a tool for traders and exchanges looking to transfer large amounts of bitcoin (or other tokens) quickly and privately.

Liquid also supports payments using other digital assets such as Tether, but for the purposes of this article we focus specifically on Liquid and Lightning as layer-2 solutions for Bitcoin.

Below, we examine six key differences between Liquid and Lightning, and how each network is optimized for different use cases. These differences are summarized in the following table.

The Lightning Network is optimised for processing micro to small-sized transactions. Users send payments to each other by finding a pathway of Lightning channels through the network that connects the sender to the recipient.

However, the size of payment each Lightning channel can process is limited by the size of the initial funding transaction used to set it up. This makes it less likely that, as transaction size increases, a complete pathway from buyer to seller will be found, making the Lightning Network less reliable for large transactions.

For frequent large transactions, a significant amount of channel management is required on behalf of both the sender and recipient to ensure there is enough liquidity to meet their payment requirements. To some extent, this requires the users involved to predict their spending behaviour.

As the Lightning Network grows, its ability to handle larger payments will improve, but as things stand, large payments cannot be sent on Lightning reliably.

The Liquid Network is optimised for processing medium to large-sized transactions. Unlike Lightning, Liquid operates via a sidechain: a unique blockchain that allows users to transact with tokens that are 1-to-1 exchangeable for bitcoin (BTC) called Liquid Bitcoin (L-BTC).

There are no limits to the size of a transaction on the Liquid Network (technically 21 million BTC would be the limit!). A user can peg in as much BTC as needed and start transacting immediately. Recipients also do not need to engage in any channel preparation, they can receive as much as a sender can send.

Since Liquid operates on its own blockchain, the number of transactions it can handle is subject to a blocksize limit. Fees are currently very cheap (0.1 sats/vbyte for next-block confirmation), but as Liquid adoption grows fees are expected to increase which will make micro transactions unviable on-chain.

However, Lightning and Liquid are compatible and it is possible to run Lightning payments on Liquid, allowing users to take advantage of Liquid’s unique properties whilst processing micro payments.

The opening and closing of Lightning channels represent Lightning’s on- and off-ramps.

In order to set up a Lightning channel, two Bitcoin users need to fund a multisignature address on the Bitcoin network. Once funds have arrived in this address, they can only be accessed with a signature requiring both the channel users’ private keys.

To transact on Lightning, users will need to run both a fully-synced Bitcoin node and a Lightning node, which need to remain online for as long as their channel is open.

There are two options for on- and off-ramping from the Liquid Network:

As with creating a Lightning channel, the process for creating Liquid Bitcoin (L-BTC) is initiated by an on-chain transaction. BTC are transferred to a Bitcoin address and temporarily locked. The output of these transactions is then used to unlock an equivalent amount of L-BTC on the Liquid Network, which can then be transacted according to Liquid’s protocol rules.

To convert L-BTC back to BTC, users can either conduct a peg-out operation via a Liquid Federation member, or simply find another Liquid user willing to swap L-BTC for BTC P2P. Like Lightning, engaging with the Liquid Network will require at least two mainchain transactions.

Most users will instead prefer to swap in and out of the Liquid Network. A number of companies such as Liquiditi, SideShift AI, SideSwap, and Bitfinex, offer services to quickly swap BTC for L-BTC and vice-versa.

Payments via the Lightning Network can be made almost instantly. Since Lightning payments do not require confirmation on the blockchain they can take place as quickly as an internet connection will allow: potentially allowing for millions of transactions per second.

As long as channels can be found to process the desired size of payment, speed of transactions represents one of Lightning’s major advantages. Lightning’s speed allows bitcoin-denominated transactions to be used for everyday purchases, such as buying coffee. It also opens up avenues for new payment applications such as streaming payments for online services.

In contrast to Lightning, the Liquid blockchain produces blocks to confirm transactions, which makes its transactions slower. Nonetheless, transactions are still significantly faster than on the Bitcoin blockchain. New Liquid blocks are produced at regular one-minute intervals—ten times faster than the average Bitcoin block—and two confirmations are required for a transaction to be considered settled. This means that Liquid transactions take around two minutes. This timeframe is typically sufficient for traders moving funds between exchanges and private wallets, but will generally be too slow for retail transactions such as buying coffee.

The Lightning Network provides users with a greater degree of privacy than on-chain transactions with Bitcoin, which can be observed in real time. Since Lightning payments are routed through a series of nodes, neither the recipient nor a relay node can know for certain where a transaction originated.

Unlike on-chain payments, Lightning payments don't leave a permanent trace on an immutable blockchain, so a deanonymizing attacker must be involved in forwarding the transaction—they cannot recover that information later.

Nonetheless, a degree of monitoring is still possible with Lightning since individual nodes can record the channel and direction information from transactions they are asked to process. While this method of surveillance has limitations, it still represents a privacy concern.

However, neither Bitcoin or Lightning nodes use any real name identifiers, so it is still possible to maintain anonymity by protecting the link between your identity and the addresses you control.

In contrast, the Liquid Network’s protocol is designed so that the amount of funds and type of asset transferred are not revealed to anyone other than the sender and recipient. This is made possible by a cutting-edge cryptographic protocol developed by Blockstream called Confidential Transactions.

Liquid’s high degree of privacy represents an important benefit for traders. Since on-chain analytics make others aware of large movements of funds on the Bitcoin blockchain (see example of a “whale alert” below) markets can react and prices can change before traders have the opportunity to trade at their desired price. Due to the confidentiality of Liquid transactions, traders can trade without the risk of alerting other users to their trading intentions.

However, users should bear in mind that it is necessary to choose between KYC and non-KYC solutions when converting L-BTC back to BTC. KYC requirements provide third parties with information linking L-BTC users to their Bitcoin addresses, but at least any analytics will not be able to track the transaction history of the L-BTC beyond the deposit to the platform.

Generally, users of Lightning must hold their keys online until a channel is closed. Lightning nodes also require ongoing monitoring and rolling backups. Although hacks are not known to have happened to date, when nodes are online it is theoretically possible for attackers to steal sensitive information and even private keys.

In addition, since multisig Bitcoin storage is not possible on Lightning, funds need to be controlled by a single key. This is not ideal for storing large amounts of bitcoin or for institutions who may not want a single person to have sole access to their funds.

This article by Coindesk outlines some key potential attack vectors for Lightning and how they are being addressed by developers.

With Liquid, keys can be held offline in cold storage, making it impossible for funds to be stolen without physical access to the private keys. Through Blockstream Green, Liquid users can also take advantage of a hardware wallet, keeping their L-BTC private keys permanently offline.

The Lightning Network allows for transactions to be secured by the Bitcoin network without being directly broadcast to it. Since users of a Lightning channel co-sign every change in balance of the channel, either user can choose to broadcast a settlement transaction at any time. As long as both parties are constantly monitoring the channel state (via their node or wallet service), this makes Lightning highly trust-minimised since neither of the channel’s users need to trust each other in order to transact.

Liquid’s trust model is based on a federation consisting of 15 hardware security modules (HSMs) attached to host servers (known as functionaries). The functioning of the BTC:L-BTC two-way peg relies on two thirds or more of the Federation functionaries acting honestly. Whilst some trust is required, the distributed Federation model is still significantly superior to the trust model that most traders are exposed to, whereby they entrust their funds to a single exchange.

The Lightning and Liquid Networks are complementary layer-2 solutions that allow Bitcoin to be used for a greater range of applications, and by a greater number of people. Naturally there are trade-offs to be made when utilising any layer-2 solution, so it is important to understand the use cases for which each is appropriate, and when it is best to stick to on-chain Bitcoin transactions.

The Lightning Network provides an excellent means for making small transactions quickly and cheaply, where the very high levels of security provided by on-chain transactions is not required. Typically, this will be in applications such as retail and gaming.

Liquid allows for medium to large Bitcoin transactions to be undertaken with a high degree of confidentiality and security, and a reasonable degree of speed. This makes it suited to trading and lending applications.

For users wanting to take advantage of the unique properties of both Liquid and Lightning it is possible to build Lightning Networks on Liquid, which will allow the sidechain to scale further.

Get Started on Lightning

Download Breez or Blue Wallet and deposit some bitcoin to your wallet, then find a merchant to start making some payments.

Get Started on Liquid

Download AQUA, Blockstream Green, or SideSwap, and swap some BTC for L-BTC, then find a friend or exchange to start making some trades. 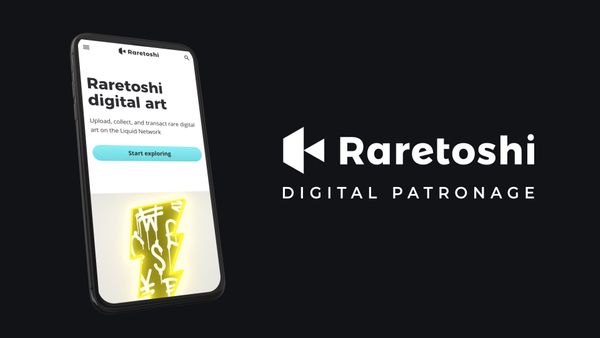 We’re very excited to announce the arrival of Raretoshi and the LNFT platform! 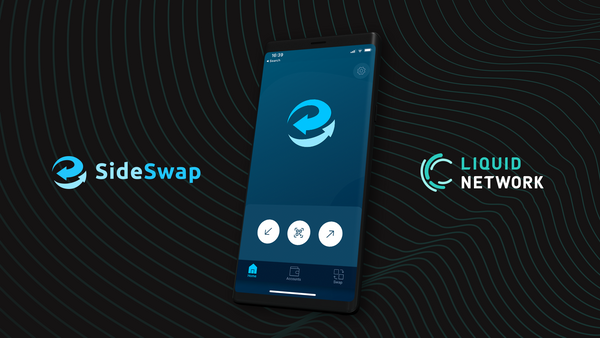